In this post we’ll explore the topic of optical flow. Optical flow has many useful application in computer vision such as structure from motion and video compression. Let’s see if it’s possible to use optical flow to predict a vehicle’s motion from a dash camera feed.

Thanks for the video: driving dash cam 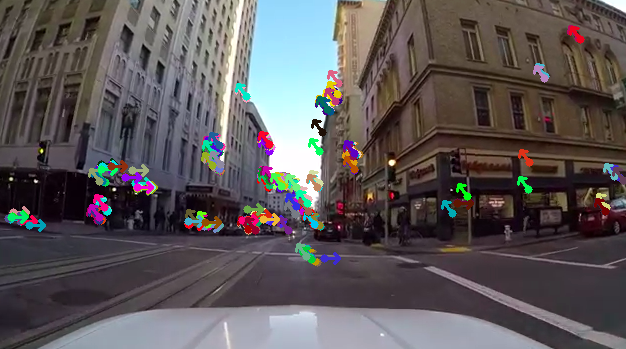 I decide to use Lucas–Kanade to calculate optical flow.

I decided to use the ORB(Oriented FAST and rotated BRIEF) algorithm to collect features (or keypoints), from a video frame. ORB is the child of two different algorithms, which I’ll discuss briefly. Later, we will track the collected keypoints from ORB and use an optical flow algorithm called Lucas–Kanade to predict the vehicle’s motion and direction.

ORB uses FAST(Features from accelerated segment test ) to detect features; as you could have guessed from the name. The FAST feature detection algorithm is used to collect keypoints (i.e pixel regions that contain corners). I chose FAST because it preforms well with real-time video. FAST looks at a Bresenham circular region of 16 pixels and is able to detect corners quickly within a given threshold. It provides similar accuracy to the SIFT algorithm, but it accomplish it’s task in less time because it “checks” less pixels.

Why combine FAST and BRIEF?

If we want to predict motion and direction, we’ll first need to find the mean angle of all the keypoints between two frames. After we have found the mean angle we can determine the direction from circular motion.

We’ll use arctan to calculate the angle between keypoints.

Now that we have found the mean angle, we can determine the motion and direction of the vechile. I will admit, this is going to be a bit hand-wavy.

Give the mean angle, we will define stationary motion to have 0 degrees. Forward motion will be greater than 0 degress and less than or equal to 180 degrees.

Try to imagine an object moving directly towards you. The angle between objects motion and the background plane is 90 degrees.

Using this intuition, we can determine if the object’s motion is more to the left or the right.

If the mean angle is greater than 0 degrees and less 90 degress, than the objects direction is more right.

If the mean angle is greater than 90 degrees and less 180 degress, than the objects direction is more left.

This is by no means a perfect system for determining a vehicle’s motion, but it’s not a bad start.